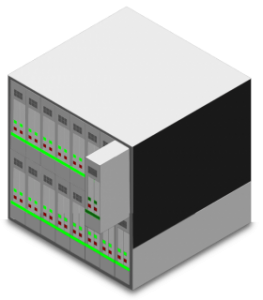 Cybercon dedicated Docker servers hosting service starts at $99 per month.  You get an enterprise grade dedicated blade server to run your Docker Host with various containers. 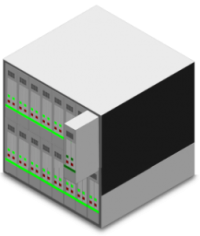 Most frequent questions and answers

What is a dedicated server?

A dedicated server is a type of Internet hosting in which the client leases an entire server not shared with anyone else. This is more flexible than shared hosting, as organizations have full control over the server(s), including choice of operating system, hardware, etc. Server administration can be done by client or be provided by the hosting company as an add-on service. Dedicated servers are most often housed in data centers providing redundant power sources and HVAC systems. The server hardware is owned by the hosting provider and they will provide support for server hardware replacement at no cost to clients. Using a dedicated server offers the benefits of high performance, security, application stability, and control. Dedicated server hosting is an ideal solution for websites with high traffic volumes, sensitive customer content or those in need of secure e-commerce applications.

What is a blade server?

A blade server is a stripped-down server computer with a modular design optimized to minimize the use of physical space and energy. Like a standard server, a blade server has its own motherboard, CPUs, RAMs, hard drives, and network adapters. You can have the console access of a blade server, watch and config its system BIOS, install your preferred server operating system on it.

How fast can you replace a failed hardware on a dedicated server?

When customers order dedicated server hosting from Cybercon, we will provide and maintain the server hardware for our customers. We offer One Hour Hardware Replacement Guarantee! In the event of a hardware failure, Cybercon will repair or replace the failed parts or servers within one hour – 24 hours per day, 7 days per week.

How much bandwidth do I get for a dedicated server?

The bandwidth you get is based on the service plan you selected. The bandwidth amount is specified in your dedicated server hosting packages. We offer unmetered bandwidth so you won’t get a surprise bandwidth bill. Here is how you convert port size measured in mbps to total monthly data transfer measured in GB:

For example 20mbps bandwidth may get you 6480 GBs of Monthly Data Transfer each month; A typical text based webpage is about 10,000 bytes. So 1GB is about 100,000 pageviews. 6480 GBs is about 648 millions pageviews per month. You get less pageviews if your website is heavy in images or videos.